Local Family Physician, way too long separated from my passion for music, composing, and performing. After some 15 years, I “woke up”, cleaned the dust off of my beloved Gibson Les Paul DeLuxe 1976, and composed a song, “If we could learn from children”. Few years later, after another period of hibernation, forced upon by professional responsibilities, “woke up” again, hungry for more music….I was blessed by meeting Scott E. Nowak, local, yet world class guitar player, producer, recording engineer, who blessed me by agreeing to record the song…thus the first CD. The proceeds went, and are still going to charities, 50%, Chuck E. Baby to the breast cancer charities, and myself to local orthodox monastery. Few years later, another CD, “Then and now…”, with two instrumentals, one old, very old, some 25 years, and one new, composed during a surge of emotions….I have not promoted this one due to lack of time, propaganda, connections, etc… proceeds are still going to my favorite charity….Chuck E. Baby, locally one of the best known performers, singers, musicians, honored me by inviting me to record a four song CD, “Crossroads”, two songs each, again for the same charity causes….I hope you will enjoy the music. 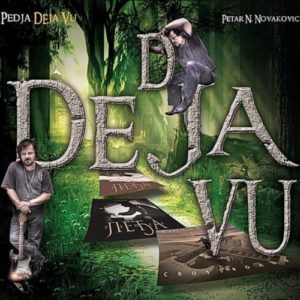 Finally, after years and years, I am putting together a group of songs that stem from the late 70s, through the present….This CD has 15 songs. Promotion: June 11, 2011, at St Sava Serbian Orthodox Church, Phoenix, as a part of International Orthodox Christian Charities (IOCC) fund raising event.
The CD includes 5 previously released songs, as well as two of those that were done as instrumentals, now were recorded with vocals. The rest are either brand new, or those from 30 Lbs. ago, or the combo, if I could not remember all the parts of the old ones.
I was blessed with continuing to work with the same group of musicians, “top notch”, and all of them added a little bit of themselves into each song we recorded. I am eternally thankful to Joe Morris on drums and percussions, John Willis on bass, Ted Belledin on keys and horns, as well as Jennifer Browne, Chris Alcaraz, Gigi Dixon and Chuck E. Baby on vocals. Scot E. Nowak was again the pillar of this project, with his production, arranging, recording engineering, as well as with his guitar playing on 3 songs. Thank you, my friend! I will try to promote this CD much more seriously, as I do believe in it, and I believe that it has at least a few songs that could be enjoyed on many different kinds of radio stations, all over the world. Major amount of proceeds will be going toward our favorite charities, as always. Thank you all for your support and God bless. Pedja 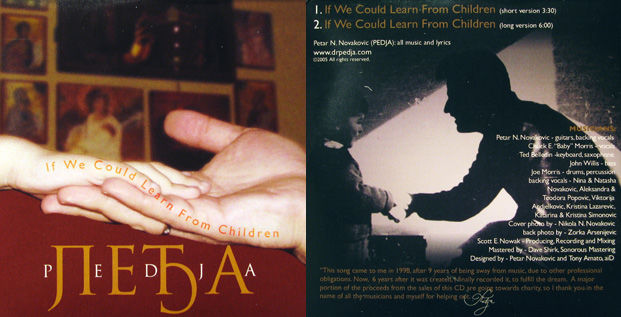 This song came to me in 1998, after 9 years of being away from the music, due to the other professional obligations. Now, 6 years after it is created, I finally recorded it, to fulfill the dream. A major portion of the proceeds from the sales of this CD are going towards charity, so I thank you in the name of all the musicians and myself for helping out.

Single Track: If We Could Learn From Children 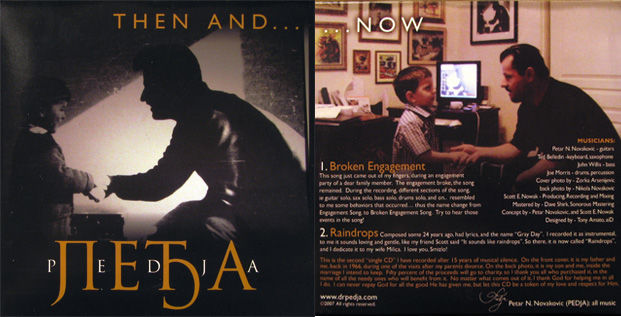 This song just came out of my fingers, during an engagement party of dear family member. The engagement broke, the song remained. During the recording, different sections of the song, ie. guitar solo, sax solo, bass solo, drums solo and on…resembled to some behaviors that occurred…thus the name change from “engagement Song”, to “Broken Engagement Song”. Try to hear those events in the song!

Composed some 24 years ago, had lyrics and the name “Gray Day”. I recorded it as instrumental, to me it sounds loving and gentle, like my friend Scott said “it sounds like raindrops”. So there, it is now called “Raindrops”

This is the second “single CD” I have recorded after 15 years of silence. On the front cover, it is my father and me, back in 1966, during one of the visits after my parents divorce. On the back photo, it is my son and me, inside the marriage I intend to keep. Fifty percent of the proceeds will go to charity, so I thank you all who purchased it, in the name of all the needy ones who will benefit from it. No matter what comes out of it, I thank God for helping me in all I do. I can never repay God for all the good He has given me, but let this CD be token of my love and respect for Him.

1. Crossroads – Play song below in SoundCloud

Be the 1st to know about
news and updates!

Be the 1st to know about
news and updates!